Featuring our next #VeteransInSpine feature, Nicholas, Associate Manager of Manufacturing in Ohio. 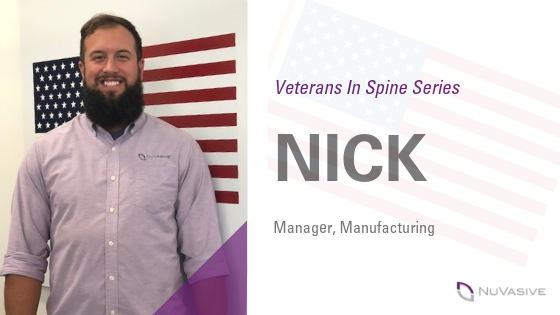 I wanted to support my family as best I could and I hoped that if I joined, my children wouldn’t have to in the future. In 2008, I started in the Navy on the USS Georgia (SSGN 729 Blue Crew) based out of King’s Bay, Georgia. I graduated Navy Dive School in 2012 and finished my last two years as a Career Counselor helping sailors of all ranks get ready for their next adventure.

The biggest challenge was learning what is expected of me and making sure that there’s a path to grow. Coming to NuVasive, I was blown away at the amount of care that the leadership has for life outside of work and family.

The ability to understand the importance of treating people like people and maintaining that high-level, culture of trust really drew me to choosing NuVasive.

At the time, NuVasive Ohio was going through a time of transition and the hiring managers were looking for a people-leader that had been through a lot of ambiguous situations. I played collegiate baseball, was a Navy Submariner and Scuba diver, and was able to explain my background and how that could translate to this position. The submarine force trained me to make decisions at “Cheetah Speed” long before I was introduced to it here at NuVasive!

Through the military, I learned how to lead people both by example and as an individual contributor in the most stressful environment on earth.

The more responsibility you have within the military and the civilian world, the more your job is about your team’s successes rather than your own personal success.

It was in a way, simple. I came in and truly got to know the people that make our NuVasive parts every day and observed how they went about it. I wouldn’t say I’ve had to reinvent myself at all, but instead, I took the people skills I’ve learned along the way to make sure that my team could trust me.

Once a team trusts you as a leader, there is no limit to what can be achieved.