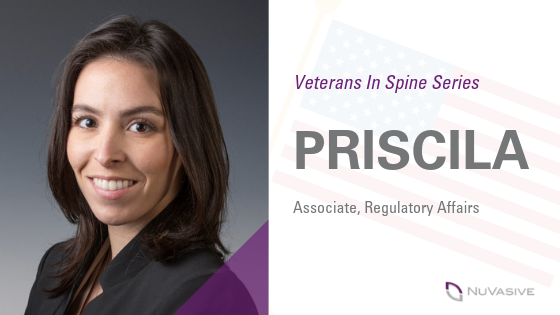 My family and I emigrated from Brazil in 1992 and as I grew up, I held on to the desire to serve this country that had provided us with so much opportunity. I joined the Marine Corps in 2007 and was stationed on Joint Air Base Anacostia-Bolling in Washington, D.C. while attending college in Virginia. After six years in the service, I transferred to Marine Corps Base Camp Pendleton in Oceanside, CA in 2013 where I honorably discharged shortly after.

The biggest challenge since entering the business world has been learning how to establish valuable relationships through networking with fellow peers inside and outside of the Medical Device Industry. This was a crucial tool to learn, and only after I adopted this business practice was I able to feel more comfortable and acclimated in a professional setting.

How did you end up working in the Medical Device industry?

In 2017, a friend working in the biotech industry had recommended that I speak with a recruiter from a large scientific staffing agency based in San Diego. I was able to enter the Medical Device industry with a small contract position in Regulatory Affairs, and I felt it was the right place for me from that point forward. With a bit of experience, I gained the confidence to apply for my current position.

I felt confident that I was able to convince hiring managers of my team-player mentality, which is important in many fast-growing corporate companies.

Being able to work flexibly within tight timelines was something very much valued amongst managers and I made sure to demonstrate my abilities through the real-life experience I gained during my time in the service.

The more experience I gain in the business world, and the further I travel upwards in my career progression, the harder my interviews become. My current position required a long interview process in which five different employees and hiring managers interviewed me. I had not gone through such a tedious process before, but having been put on the spot often before and working under a pressured environment during my military enlistment, I felt more prepared going into such a challenging interview process.

During my military service, I practiced a strict mentality of being my own worst critic. I’ve had to tone down this mindset in order to better accept constructive criticism from my peers and grow to better serve my team.

I have also learned to be less critical of myself in pursuing my career path and that my mistakes are valuable learning experiences needed for my own personal growth.